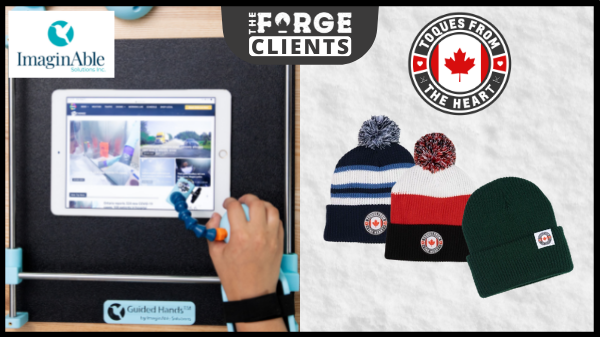 Two Forge clients were featured on Breakfast Television (BT), Lianna Genovese, founder and CEO of ImaginAble Solutions Inc. and Matt Carter, vice president and co-founder of Toques From The Heart.  Genovese, a biomedical and mechanical engineering student in her final year at McMaster University, was interviewed on Celebrate Local, presented by Scotiabank in partnership with BT.  On the show, Genovese explained how she founded the company based on a project as part of her studies, in which her class was asked to create a solution that would assist in making life better for a talented painter with a form of cerebral palsy. The painter was unable to hold a paintbrush until she tried Genovese’s first prototype. Genovese continued to develop the product into Guided HandsTM, a device that enables people with limited fine motor skills to paint, draw, write, and use a tablet or computer. At the end of the segment, Celebrate Local encouraged viewers to support Hamilton-based small businesses, like ImaginAble Solutions.

Carter was interviewed on Breakfast Television where he described how Toques From The Heart started out by sewing donated hockey socks into toques for the homeless. The Hamilton-based startup was founded in 2019 by three McMaster University students, Casey Rogan, Matt Milne, and Matthew Carter, with a unified vision to start a business with a meaningful and positive impact. The Forge client currently creates their toques from a variety of new materials, and for each one purchased they donate one to the homeless. “Last year we focused on donating around the Toronto and Hamilton community, but this year we want to go country-wide,” explained Carter. The social enterprise has now partnered with 25 non-profits around Canada, in every province.

Watch Toques From The Heart being interviewed on Breakfast Television:

To learn more and order their warm toques, visit Toques From The Heart.

Categories: Faculty of Engineering, McMaster
© 2020 The Forge McMaster All Rights Reserved
In line with University and Government's policies and recommendations amid the COVID-19 pandemic, The Forge office at McMaster Innovation Park is closed until further notice. We look forward to continuing to work with you remotely. Our programming will continue and is being hosted virtually to ensure the safety of our community. If you require assistance, please reach out to a member of staff by email or phone during regular operating hours.