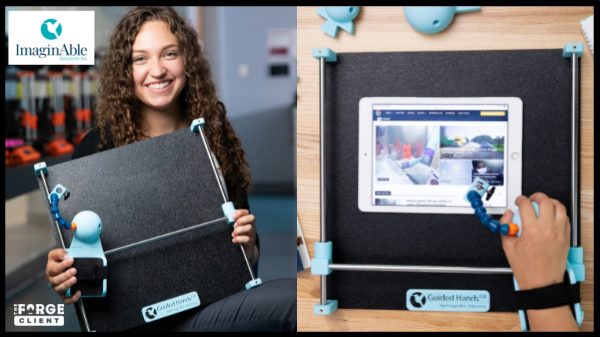 Lianna Genovese, founder and CEO of ImaginAble Solutions Inc., has made it to the top 20 shortlist for The James Dyson Award, after winning the National James Dyson Award on August 25 for her invention, Guided HandsTM. Genovese is a biomedical and mechanical engineering student in her final year at McMaster University and The Forge client who won the runner-up grand prize in The Forge Student Startup Competition in 2019. The Forge client developed a device that enables people with limited fine motor skills to paint, draw, write, and use a tablet or computer. The award recognizes an engineering student who has created an effective solution to a problem with design thinking at the forefront. It seeks to celebrate and inspire the next generation of engineers. As the National James Dyson Award winner for Canada, Genovese received $3,500 to further develop and grow her innovation and has progressed to the international stage of the James Dyson Award.

ImaginAble Solutions has introduced healthcare pilots for Guided Hands™ across North America and has launched the device into the market to people across Canada and the United States.

“I developed the first prototype of Guided Hands when I was 18 years old, it was made of pipe cleaners, straws and a sponge. Today at 21 years old, Guided Hands™ has certainly upgraded, is being piloted across North America and is currently available for pre-order!” explained Genovese. “James Dyson is one of my biggest inspirations and to win his award is an absolute honour and dream come true. I am extremely excited to represent Canada in the international round of the competition”

The Guided Hands™ design is the only product on the market offering multiple ambidextrous handpieces and uses a unique sliding system to glide the hand effortlessly during an activity.

Learn more about Imaginable Solutions and its product offerings.