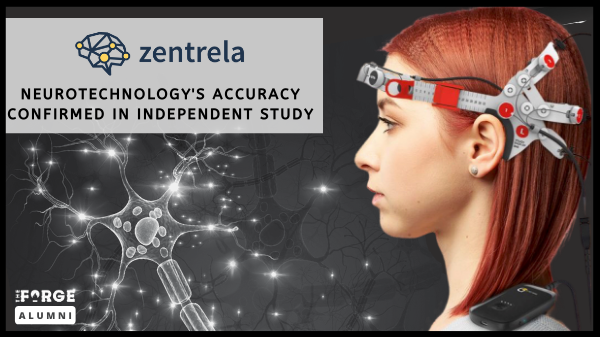 The Cognalyzer® is a novel electroencephalography (EEG) measurement device and algorithm designed to objectively characterize brainwave alterations associated with cannabis.  The study conducted by KGK Science on behalf of The Forge alumnus Zentrela, was published in the scientific journal Advances in Therapy.

The KGK Science study describes the performance of Zentrela’s Cognalyzer® neurotechnology to detect and quantify cannabis’ psychoactive effects and provides critical evidence that when combined with an oral fluid test for detecting and quantifying THC levels, neurotechnology can radically improve the accuracy of testing and minimize the likelihood of falsely determining cannabis impairment due to THC residual detection.

“Until this point, there simply hasn’t been an accurate, science-based test for quantifying cannabis psychoactive effects,” says Zentrela CEO and founder Israel Gasperin. “We have clearly demonstrated that neuroscience powered by artificial intelligence (AI) can accurately detect and quantify the psychoactive effects of cannabis. This represents a huge potential for Zentrela to become the definitive source for specific, science-based data on cannabis product effects for the entire industry.”

Zentrela is a Hamilton-based start-up and an alumnus of The Forge Business Incubator Program, in the past three years the start-up has raised $2 million in funding for their prototype and clinical trials.