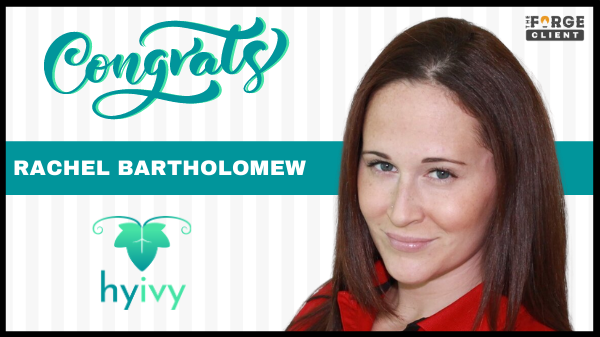 On April 4, Rachel Bartholomew, the founder and CEO of Hamilton-based HyIvy Health has announced that she has been nominated for the RBC Canadian Women Entrepreneur Awards by Women of Influence. The Forge client creates an intelligent and holistic pelvic rehabilitation device for the one in three women worldwide who will experience a pelvic health complication in their lifetime. The award shines a spotlight on Canada’s most accomplished and impactful women who have demonstrated excellence, from economic growth to social change, from local to global reach, across multiple sectors.

In 2019, Bartholomew got the shocking news at age 28 that she was diagnosed with Cervical Cancer, having to undergo surgery and radiation therapy. Bartholomew was not prepared for the after-care pelvic pain that she experienced post-treatment and serious implications it would have on her future health. From that moment Bartholomew started connecting with thousands of other women in Facebook groups who were going through similar experiences.

Even though her body needed to rest in bed, her brain was racing with ideas and solutions to solve the issues she and many other women were facing. As an innovator, she felt the need and responsibility to devise a solution for all the women that may be suffering in silence. She then started designing a pelvic rehabilitation device and founded HyIvy Health.

“We are honored and privileged to even be nominated for this national exposure. Any way I can showcase the challenges we face in women’s health and the work my team has done on a national scale makes me excited,” said Bartholomew. “My hope is that this nomination will allow us to gain the attention of just one more woman who can benefit from our product for a healthier future.”

Read the article published by Women of Influence, titled “ How this woman’s health challenges inspired her to build a tech business.” on March 25, 2021.