Get our newsletter Apply To Our Student Startup Competition 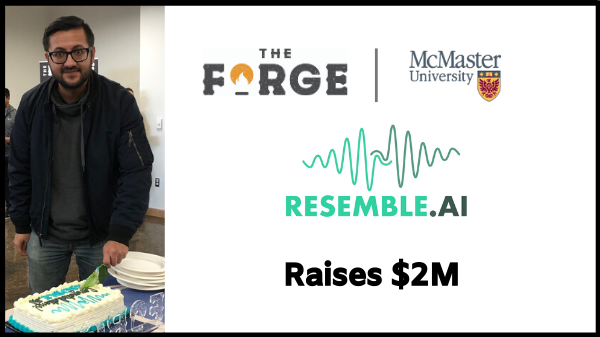 Utilizing the power of artificial intelligence and machine learning Resemble Clone can generate a near-perfect voice clone based on 3 minutes of audio samples of a person’s voice. Resemble Clone aims to solve the large scalability problems that creatives face when creating speech content by utilizing a few minutes of audio data to create full audio tracks used for immersive VR experiences, animated feature films, or even generate entire audiobooks.

Saqib Muhammad and Zohaib Ahmed cofounded Resemble AI in 2019 and joined The Forge Business Incubator program from March till November 2019. The Forge is funded by McMaster University and works with tech start-ups in Greater Toronto Area and Hamilton to build successful businesses, by providing companies with expert mentorship, seed funding and dedicated office space. The Forge is proud of the progress that Resemble AI has achieved in such a short period of time.

“We set out to build a product that helps creatives get over the hurdle of crafting audio content”, said Co-Founder and CEO Zohaib Ahmed.  “With more audio content being produced year after year – smart speakers, Airpods, podcasts, audiobooks, and digital characters in virtual and augmented reality – there is a large and growing need for fast and accurate voice cloning.  Resemble AI’s unique focus is to empower creatives, so they can control and produce content without sacrificing quality.”

Resemble Clone, is a powerful web-based editor that enables users to tune the expressiveness of the speech content down to the sound byte. Proprietary algorithms smooth out the audio to make it sound realistic and the long, an often tedious process of creating new speech content is eliminated. Resemble AI’s API also makes handoffs to developers simple.

“We’re excited by the idea of Resemble making real-time creation and editing of audio content – which today is a painful bottleneck for creatives across industries – as easy and accessible as editing animated visual content,” said Clara Lindh Bergendorff, investor at firstminute.  “Resemble is also well-positioned to ride wider audio waves, from the growth of audio content consumption and voice applications to growth in audio-first devices.”

Resemble AI is aware of the challenges that come with new generative technology and has heavily invested in making sure all voices are protected. In conjunction with their voice synthesis product launch, Ahmed and Muhammad launched Resemblyzer, an open-source tool to detect deepfakes to combat any misuse of users voices. Resemblyzer uses a deep learning model that derives a high-level representation of voice samples and is able to predict whether they are real or generated.

“As researchers and entrepreneurs, we are thoughtful about the benefits and/or risks to society of what we are creating,” said Co-Founder and CEO Zohaib Ahmed. “When you’re creating your voice on our platform, we take extreme measures to ensure the ownership of the voice.”

With the backing and support of well-established firms, Resemble AI is ready to make waves in the entertainment industry.  To learn more about Resemble AI, visit their website at https://www.resemble.ai/.